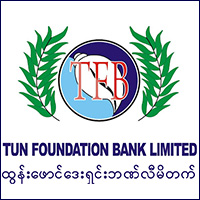 Tun Commercial Bank was established in 1994 by U Thein Tun, the Chairman of the MGS Group of companies. From an initial branch in Yangon it has expanded across the country, including the main cities of Mandalay and Naypyitaw. The bank currently has 14 branches and has plans to open an additional 10 branches over the next few months. The bank has been conservatively run and comfortably survived the domestic banking crash in 2003, when a number of local banks were shut down.

The Bank is a normal private bank and run on strictly commercial terms. However, unusually for a bank, the shareholders have chosen to pay the majority of its profits to charity. The focus for the charity is on Education and Health and includes a charitable hospital and schools set up and funded by the Chairman.